We all have a ‘Joker’ within us, I know mine and it isn’t nearly as severe as the ‘Joker’s’ in the film, but it is plenty enough to gain understanding in my work as a psychotherapist. In Primary Care where I worked for 12 years, one of my old patients came to mind while I was watching the film, I saw him around the time the Maudesly psychiatric 24 hour emergency clinic closed down because of the cuts, of course, I hated that time, I hate that word CUTS. (The more I hear about CUTS in our community the more in my work I see our young people’s scars from their cutting, that is another story). 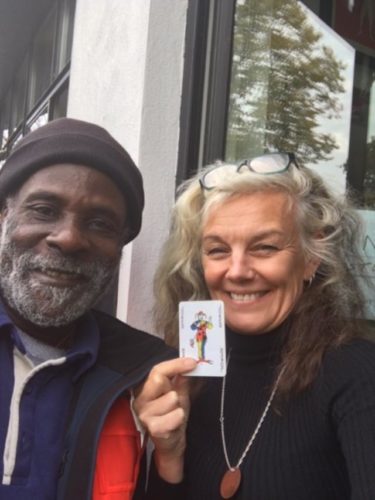 In the film the Joker says to his social worker “You never listen to what I am saying. You always ask me the same questions.” I didn’t ask my patient the same questions, I just did what I do best, I listened to everything he said, intently. It was no surprise he’d had an extraordinarily abusive mother and his father’s presence came in the form of a creased black and white photo his mother had given him before she died. Sometimes my patient came into the surgery with bruises where he’d self-harmed and/or had been in a fight, he’d self-medicate with anything/everything he could get his hands on and he was usually in trouble with the police. Of course he was angry, very, very, angry, underneath his anxiety and depression was that human rage that has to be expressed somewhere somehow. (I know about this, I discovered during my own therapy that my rage can be found in the form of my MS symptoms.)

I began to care deeply for this young man as we built a relationship over some years, he, me and his GP worked together, beginning the process of psychologically ‘re-parenting’ him. He soon became dependant on me, he bought me flowers one session and arrived drunk the next, he would fall asleep or be angry with me for not sorting out his problems fast enough. During those years I set up a small group for men who were feeling suicidal, this patient was then valued for helping another and the group observed that how he treated me and how his mother had treated him was alive in the room at all times, but we all managed it, learning to make sense of it. There was a spark of love in those sessions as I provided a safe empathic container.

In the film, the Joker’s social worker ends their relationship by saying “They don’t care about people like you, or me.” I had to bite my tongue not to say those words to my patients, as the cuts came and my clinical supervision was cut and then my job was cut in favour of a more computer-based ‘thought’ changing – you guessed it, Cock and Ball Torture CBT.

My patient left the surgery soon after I left, he got kicked out. He was rude to reception staff on more than one occasion, apparently, but it wasn’t their fault, they weren’t trained to understand (just like the Joker on the bus when he is trying to communicate with the child and the mother just doesn’t get it). My patient had to leave the surgery, our staff had to be safe, but the measuring of ‘safe guarding’ is appallingly inaccurate (that is another story).

In my clinical supervision, after my final session with my client I said. “I am devastated. I believe there are only two ways this will end, he will kill himself or someone else. I was working on this and now I can’t, and now there is nowhere for him to go. There’ll be a photo of him up on the board with a BEWARE sign over him.”

As the Red Rebels of Extinction Rebellion rebel against climate change, they look the police in the eye and sometimes make them cry because they know, that they know, that I know, that we know. THEY don’t care.

As student services are cut in colleges and mental health services cut and cut (and don’t be fooled about all this money the government are saying that’s being pumped in, it’s not real therapy, it’s questions, the same questions, and computer-based everything) Joker’s are rife and will riot. Kindness prevails over all, the Red Rebels gestures have got it right. If everyone had been kind to the Joker there’d be no story, no Batman. Watch out world, we are living in the age of what I call ‘The Return of the Repressed’. Stay safe on Halloween.

Here is a song I have written for 31st October about Brexit, it’s called ‘INS’, which is short for Inverted Nipple Syndrome (a taboo common condition that can affect all human beings).