Archive from Apples and Snakes

Comedian Liz Bentley gave a one-woman theatrical show with stories from a year in her life at The Bluecoat on 23 August 2012 @ Blue Coat, Liverpool – DAO

Who wears gold lame trousers, orange nail varnish and 6” Primark bondage sandals with peep toes? Liz Bentley! She is seated on stage beside a table that is littered with a variety of props for her show; books and a riot of paraphernalia that describe her life.

She hits the ground running, even though she sits for the entire performance, and you tumble at break neck speed through the events that defined 2011 for her. Comic stories are interspersed with poems and songs, as she accompanies herself on the ukulele and Casio keyboard – which she claims to have bought in Toys-R-Us for £2.99!

AAA stands for Age, Anxiety and Alzheimer’s – no prizes for guessing the general topics for her acerbic wit! There are no edges to Bentley. She not only says it as it is, but says it as most people wouldn’t dare say it. Her humour is as outrageous as her gold lame trousers!

At the beginning of the show she cleverly asks a somewhat reticent audience if there’s anything we would rather she didn’t talk about, or that is likely to cause offence. We are still ‘cold’ and uncertain of what’s in store. One thing’s for sure, you don’t draw attention to yourself when there’s a comedian upfront, otherwise you stand every chance of becoming the butt end of their jokes all night! There is a general murmuring and shaking of heads as the audience assents and Ms Bentley is granted carte blanche to say and do as she chooses. After all, when she was polite enough to ask first, how can you object to what she goes on to say!

When two women leave – not something you can do discreetly when you have to pass the performer to get to the exit – she breaks her flow, following them in a one-sided conversation all the way to the door. After a couple of seconds of silence she launches into a fantasy of why they left and what they might be up to now, and we’re off again. Oddly the women who left, are now more present in their absence than if they had stayed, making several guest appearances in other gags later in the show!

Liz Bentley’s poetry style is very straightforward and reflects her ‘say it as it is’ approach. She takes reality and holds it up with a quizzical tilt of her head that seems to ask “what’s that about then?”

She says and sings the messy reality of life with the ease of your best mate having a gossip down the pub on a Friday night. If anything let her down it was the theatre setting, which was a touch too formal for her style and left me wishing that we were sitting in the bar, having a pint with her as she entertained us.

Liz Bentley is a woman who is 120% her Essex self and that’s what you get from start to finish – 120%. You walk away smiling and uplifted, sure in the knowledge that if she can laugh, despite the adversities of life, then so can you! 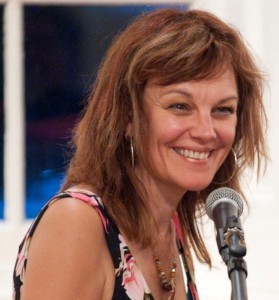 It’s hard to put a label on Liz Bentley: she’s a poet, but she’s funny enough to get into comedy listings and she also plays the ukelele and keyboards. Oh, and she’s a qualified psychotherapist, which is where her show Crash Bash Trash comes in.

The other CBT – Cognitive Behaviour Therapy – provides the spine of the performance, with tales drawn from her day job experiences (plus she has personal knowledge of undergoing psychotherapy herself). Could be a total downer, but Bentley has such a warm, open personality that we’ve yet to see an audience fail to be drawn in and love her. The fact that she has a keen talent for observation and self-deprecation adds to the enjoyment and she is also, simply, hilarious.

Liz Bentley: I’ve Only Got Myself To Blame

The lo-fi mood of this gig is set when, following the almost forgotten Eighties hits that form the walk-in music, Bentley slips up to the stage from the back of the room, takes a seat and hits us with some of her poetry.It’s a short verse that concerns a broken coffee table. Bentley looks quite serious as she gazes almost confrontationally out at the crowd. It’s disconcerting as she explains that what she does is poetry (because it’s ‘easy’) and that it had to be put in the comedy section as there’s no poetry section in the brochure.

You’re pondering that maybe this show was a mistake when she launches into a ditty about how a cyclist ruined her life and cracks her first smile.

Bentley’s show proves to be one of the barmiest 60 minutes you could spend at the Fringe. There are more, many more, poems about the mundane – residents’ association meetings, verrucas and breast-feeding – set to her amateurish yet charming ukulele and keyboard playing. The show feels raw and the talk, too, is of real experiences – of childbirth and her job as a therapist on the NHS – yet it’s all compulsive listening

Bentley is beguiling. Her delivery is deadpan and acerbic, as the show progresses her unapproachable demeanour at the beginning softens, as if we had to gain her trust, rather than the other way round.

Later on there is surprisingly rich material to be found in the forms you have to fill out just to see a therapist and off-the-wall competition to guess the weight of her dead dog.

Though of course it’s the reviewer’s job to express why this was such an exhilarating experience, it’s difficult to encapsulate. On this occasion, you’re just going to have to go and see.