These last few weeks have been difficult. Chronic insomnia and flu viruses affecting me and most of my family.  The general election on Thursday falls on ‘Perverse Verse’ my show I host at the Ivyhouse in Nunhead. It was supposed to be our Xmas Stocking show, it’s changed into something more befitting to the occasion. I had no choice. 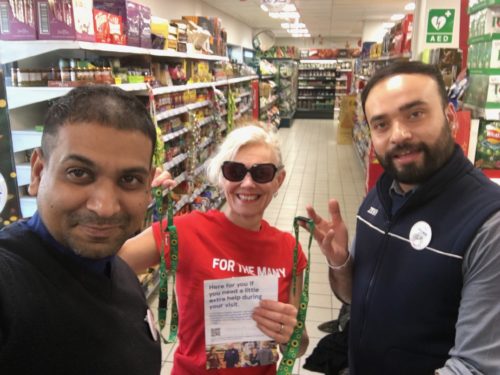 On ‘Int’l day of persons with disabilities’ I was due to host a night of celebration with ‘Hammersmith and Fulham Coalition against Cuts’ but I was ill. I was also supposed to be exhibiting my work at Wierdo zine fest at Science Gallery,  but because of the incident at London Bridge, it was cancelled.

The highlight of my week was popping into Tesco Metro, not to shop, I needed to get cash from the cash point, but I wanted a photo, and to have a meaningful exchange outside of my house.

The shop was virtually empty, it was like I had Tesco metro all to myself.

“Hi,” I said to the one cashier. “I write a blog for Disability Arts Online about waiting for the Tesco Delivery Man, they brighten up my day and today, I’m excited to be out of the house, and inside a real shop with other shoppers” I looked around and saw that there were a few people musing the isles. “And cashiers. I love cashiers,” I smiled at her. “It’s a shame that there are fewer of you, I notice that younger people prefer the machines, I think it’s to do with having grown up with computers, they struggle with intimacy and communication, I’m a psychotherapist and see more young people than ever before.” The woman nodded. “The few times I have used the machines, I’ve got it wrong and have had to call a cashier, so it seems like a waste of time, either that, or I have confirm that I am over 18. But I have MS, I rarely shop anyway.” 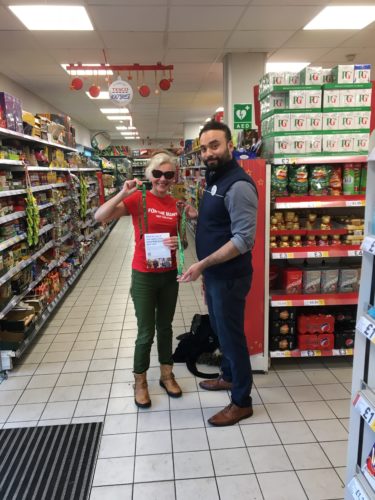 The cashier beamed at me and produced a Lanyard and a flyer from beside her till, she handed it to me. It read “The Sunflower Lanyard Scheme, some people with hidden disabilities such as autism, MS and hearing loss, might need help while in store…..” Within seconds the manager and another member of staff wanted to pose with me and here they are. I love that Tesco are now offering shopping help like this. As they say, ‘every little helps’, and it may result in me getting out of the house more often, although the traffic was road raged and I am a slow driver.

Now here’s a question, two families brought up in the same town, living in the same street, kids go to the same school, the eldest of the children vote Tory and the younger siblings vote Labour. Do you think this is because the youngest have always had to share and the eldest know what it’s like to have parental support all to themselves and want to recreate that feeling? Hmm.

We are in a state of ‘splitting’ as the psychoanalyst Melanie Klein might say.  It’s like being in labour, the intensity before the birth, then after the long and difficult pregnancy this thing comes out and we have no idea what it will be like.

Talking of babies, here is a poem I wrote and performed (my voice over while I was underwater with a breathing tank that lasted 7 minutes, in a dolphin patterned duvet, floating about, until I rebirth into the Edinburgh Apex hotel swimming pool, 2008, Edinburgh Fringe). The poem is published in my anthology “£500 a line and other poems”.

I wish she hadn’t given up smoking. I could do with a fag and I could murder a drink. Three glasses of shit CAVA at a wedding then dealing with her guilt for 8 months.That was worse than the gastro enteritis.

I’m really looking forward to going through that deep dark tunnel and getting into the pool.  Soon I’ll be pissing in someone else’s water rather than my own stinky sac, and it’s getting pretty stinky in here.  Just got to hold off from shitting, just for a few more minutes otherwise it could all go horribly wrong and I’ll end up with Dr Bari doing a caesarean, that’s what happened to my brother and he’s never recovered.  They took him to a cranial osteopath but he’s still got a flat head.  It’s difficult to airbrush baby’s heads.

I’ve done my stretch in this old cell, some have made it through the other side – some haven’t. It’s pretty hardcore to survive in these conditions.  It’s dark all the time and very basic.  She could have done it up a bit, she’s 41, she’s had plenty of time, some pictures on the womb wall, wouldn’t have to be anyone too raunchy, Helen Mirren perhaps.  An internal tattoo would have been nice, but maybe that would have stopped my concentration and deep exploration of my inner child.

Thank God the sex stopped. Most unsettling.  Then all of a sudden, it began again and she started taking it up the arse.  That was only two weeks ago and by then it had got so tight that I couldn’t move around, my arse was right by her arse.  I’m going to be a poet when I grow up and write shit like this….

I’m a baby stuck in a womb

I’ll be out soon

Otherwise Boris would have been my name

Apparently, Boris Johnson’s buttocks are similar to those of Adolph Hitler’s

I heard that at a gig she did

Now it’s my turn to help her out

Otherwise she’ll have to shout – more

So, here we go, I’m really shitting myself now ….