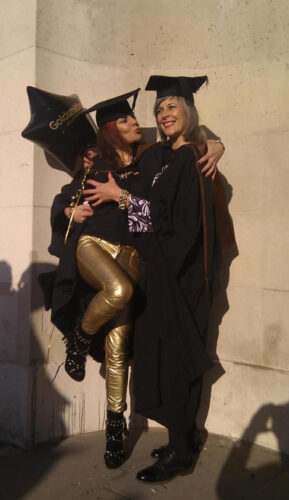 This is a drunk me and Julie Andrews on our graduation ceremony at Goldsmiths in 2010, I think. Our Master’s degree in psychodynamic counselling. A course I was already lecturing on with no degree, just two GCSEs in English, music and a CSE in typing.

I left school at sixteen and didn’t do any more education until I was working at Marie Stope Annexe pregnancy and advisory clinic where Julie and I became the last counsellors to be half-funded for our diplomas in counselling. In order to work as counsellors for women who were pre and post-abortion. After us, they ditched the counsellors.

Working at Marie Stopes and training together Julie and I became firm friends. Over fifteen years later it was a delight to find ourselves snuck in on the third year of the Master’s degree course at Goldsmiths. £2000 we paid for a Masters degree. Brilliant. Bargain. And much thanks to our friend and course convenor for this opportunity.

We’d already been lecturing at the University. My idea of lecturing involves just me. No power points or notes or flip charts. Just me with a few books I may show punters. I prefer small groups. Intimate and experiential learning.

In that year I learned that academia was not all it was cracked up to be in my little fantasy. I didn’t enjoy it. The lectures weren’t particularly current and my tutor was the worst. I’d heard she was a tricky one as some of my students who I supervised on placement had had issues with her. When I was allocated this tutor, I omnipotently thought she would be okay with me. I’d win her over with my humour and years of experience as a psychotherapist.

Why did I think I could woo her and we’d get on? Why hadn’t I listened to my volunteer counsellors? Why hadn’t I told the convenor it would be difficult working with this tutor?

I worked my arse off with that bloody thesis and everything I wrote I believed was right to her was wrong. I rewrote to her suggestions only to find it was wrong again and she’d suggest I change it back. I paid extra for her time as I rewrote. Afterwards, I realised how unethical this was. I feared I would fail. I was so eager to please this woman.

My thesis became hers not mine. I rewrote and rewrote. Whilst I passed with 56 marks I was hugely disappointed and to this day I have not revisited the thesis. It was shite. I hated it. In fact, I think it has gone from my documents and I don’t believe I have a hard copy.

Now I wonder what the point of it all was. I wasn’t and never will be an academic. Whilst I learned so much in my research from the GP surgery I worked in, my personal therapy and supervision. I did learn however how a university deals with a tutor/lecturer (not mine) who is found by one of the students to have dementia. A sensitive and sad dilemma for sure.

The best bit about the whole experience was getting pissed at the graduation and wearing my gold lame trousers under the stupid black gown that cost a ridiculous amount to hire. Just like school, the best bits were smoking in the bogs and the end of year disco.

Einstein said: “The only thing that interferes with my learning is my education”.

He’s damn right. I’d ticked a box, but at the end of it who gave a shite? I have never been asked for my certificate. What was the point? To have this wonderful photo of me and my friend Julie with her hand on my boob.

I worked at Goldsmiths for a few years later as a case management supervisor. I had the job with or without the degree.The money was shit but I did enjoy it. For a while.

My son is at Falmouth Uni in his third year of a popular music degree. I support from afar. His loan at the end will be around £50,000. What will his degree mean to him?

My daughter is a year away from her GCSE’s. I try to support her but can only help by listening and getting her help elsewhere. She hates school like I did. She’s more interested in tarot cards, crystals and appropriately hating her mother.

I have a new realisation that I am probably dyslexic. Our family laugh at me as I never get pan o choc right. Is it pan o choc or choc o pan? My brain will not withhold this. Even when I say it correctly three times over I’ll still get it wrong. But who gives a shit? Everyone knows what I mean. I don’t come back from the shop with crumpets. I don’t like choc pans anyway. Or crumpets.

Mental health surges when one struggles in our education system. The hierarchy, the bullying, the lack of self worth, the projection from over worked teachers and scared head teachers who fear losing their positions. The God of Ofsted. And now the restrictions, masks, no communal areas and crazy new exam procedures due to covid measures.

We are all funnelled into it, as Pink Floyd The Wall beautifully elaborates. We are statistics. Some thrive, but the emotional damage of being dumbed down, feeling stupid and not valued because you just can’t tick those boxes has long-lasting damage.

As I watch the changes going on in the further education college I work at it feels like I’m in a sinking ship. I’m too old to see what is on their horizon so I’m jumping off into more creative horizons. Soon to be free of all institutions.

I wonder how that will feel? I wonder whether I will miss it? Will I feel free? I guess not until my kids have left education. Maybe I’ll stay until then. Not lose sight of the reality.

Would I miss the staff I work with? I don’t miss my job in the NHS, I have memories of the lovely staff but I don’t miss them.

“All in all you just another brick in the wall” Pink Floyd.