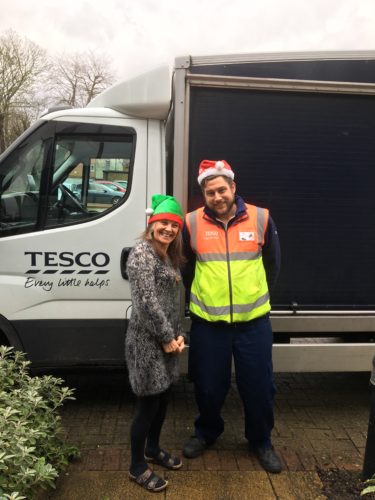 I struggle with Xmas, but try my best to do the ‘Merry Xmas’ thing. It’s exhausting to be happy, excited and full of joy, when inside the familiar feelings of isolation and detachment whirl around my head. I have to fight to them off as best I can, I don’t want to upset or have an affect on the merriment of others around me. Xmas is hard bloody work.

In the old days I would drink, but now I only drink when I’m genuinely happy, I can’t mask it in the same way. While I’m wrapping presents for others, I’m thinking of climate change, the homeless and all the stuff and how grateful I am that I can have all the stuff, but I’m conflicted, I hate the stuff. I’m thinking of austerity and racism and sexism and other things that are going on outside of Xmas cheer. At Tesco Metro (re my last blog) I gave the homeless man sitting outside, a pound.

“How long have you been homeless?” I asked.
“A year,” he said.
“What happened?’
“I was a carer for my granddad, I lived with him in his council flat. I wasn’t on the tenancy, I went away for four nights, a few weeks after he died, when I came back, I couldn’t get into the flat. I had nowhere to go. I’m waiting for a hostel.”

All the parcels I have ordered for Xmas have arrived. The only one that hasn’t, was a dress I’d bought to wear on Xmas day. It’s been signed by someone, apparently its been delivered, but I was here and I didn’t get it, no-one recognises the signature, most confusing, and sods law. I rarely buy anything new for myself, but I was making an effort, treating myself, nothing too special.  I tell myself it wouldn’t have fit anyway, it was a size small, I’m an extra small, but they didn’t have extra small.

I’m small because I’m small, always been small from birth with my defect of having a hole in the heart. I don’t eat much. I mainly stick with the MS recovery diet, but even before then, I was never a foodie. I don’t look forward to food, I don’t look forward to ordering it from Tesco, buying it or cooking it. I eat to live. But I enjoy my meaningful interactions with the Tesco Delivery drivers.

Food was always an issue for me, as a baby, a child and adolescent. When I was old enough to be really conscious of my appearance, I became bulimic. Xmas was a difficult time because of this. Here is my Xmas medley about Peace.

Xmas is coming, I won’t be getting fat
I’ll be far too busy, playing with my twat
(wrong song, I’ll start again)

Xmas is coming, bulimics don’t get fat
I make sure the sick doesn’t soil the bathroom mat

Back at the Xmas table, I’m smelling like a rose
But I’ve left a bit of puke that’s hanging from my nose

Food glorious food, hot sausage and mustard
While we’re in the mood, regurgitate the custard

On my plate one solitary brussel sprout is left
Dad talks of starving Africans and gives it to the pet
Dog, who swallows it in one and puts it’s head upon my knee
I wipe my nose with a serviette and the dog crouches down and pees

Peas on earth good will to men